A new Live Natural Disaster Map has been added to Disaster-RX.

The live disaster map will show you information of natural disasters that are occurring around the world.

Check out the Live Natural Disaster Map on Disaster-RX 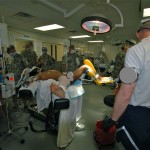