Aeromedical evacuation to a higher echelon care facility was not approved for this patient.  The surgical team’s first task was to clean and revise her amputations. They removed her index finger metacarpal because it was already fractured near its base and removed about half of her middle finger metacarpal to debulk the closure/flap area.

“We needed to pin her metacarpal fracture but didn’t have a C-arm, so we did the best we could in this deployed austere environment” the surgeon recounted.

Doing what they could without subspecialty availability or modern fluoroscopic imaging, the surgical team then performed a closure with a drain.  They made sure the closure wasn’t under tension and Muna Z. could reach the tips of her ring and small fingers with her thumb. 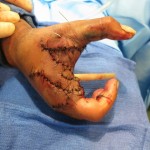 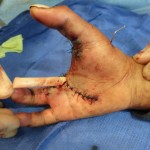 “We tried to do as much as we could for her, seeing how she’ll only have access to very limited care at an Afghan hospital, which is where she’ll be transferred next.  We also gave her father a bag of food and some military blankets.  The entire surgical team was near tears as the appreciative father spoke to us in translated statements of thanks when his daughter was ready to be discharged from care.”

If Muna Z.’s fracture and soft tissue wounds heal, she should have a functional hand for gripping.

What other options could be considered for soft tissue coverage of a hand if local coverage is needed?

Twelve-year-old Muna Z. was playing outside her home when a half buried object caught her eye.  Always inquisitive, she started to dig up the item to discover what it was.  As Muna Z. leaned over to pull the object from the ground, her would-be treasure detonated.

Muna Z.’s father rushed outside when he heard the commotion and saw that the unexploded ordnance (UXO) (i.e., unexploded mine, rocket, mortar, bullet) that triggered his daughter’s curiosity had cost her an eye and part of her right hand.

“Muna Z.’s father sought medical help in the local area, but was turned away.  He brought her to our combat support hospital praying that we could do whatever was possible to prevent complete amputation of her hand. We quickly determined she had sustained a traumatic blast amputation of her right index finger, near amputation of her middle finger, and associated fractures of the second and first metacarpal bases.  It was apparent that her eye had sustained an open globe injury and could not be salvaged.  He cried as he explained his biggest fear was that her hand would be amputated and what that stigma would mean for her future life in the community.  Realizing this stigma, as well as the functional activities of daily living (ADL) challenges Muna Z. will now face in her life will be much more difficult with only one hand, we did our best to perform a salvage. While we operated, her father prayed outside on our porch.” 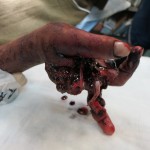 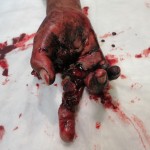 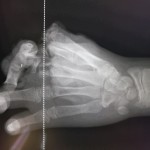 In this setting, to what lengths should we proceed in order to obtain subspecialty care for this individual?  Often the mantra in austere environments is that measures to save “life, limb, or eyesight” qualify patients to receive priority care that may include aeromedical evacuation. 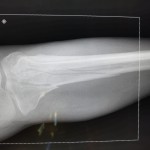 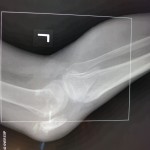 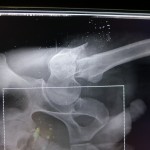 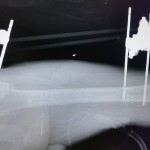 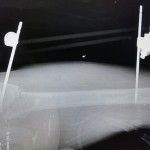 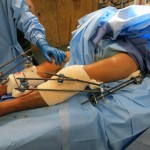 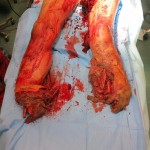 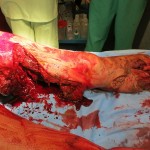 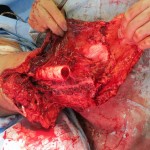 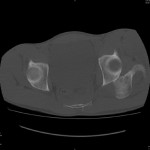 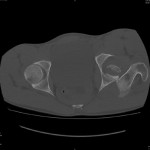 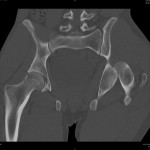 The surgeon immediately recognized that Spc Walsh had a closed left hip fracture dislocation and without delay attempted a manual closed reduction. Unfortunately, this was not successful, even with the patient under anesthesia. The surgeon then attempted another closed reduction, this time with a Steinmann pin placed in the proximal femur. The fracture, however, was found to be irreducible.

The surgeon decided to perform an open reduction with internal fixation of the Pipkin 2 femoral head fracture. 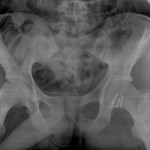 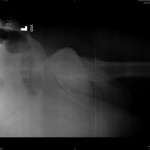 The patient was then transported by aeromedical evacuation back to his home country where he reportedly went on to complete his healing and recovery without significant complication.

While returning to camp, a small convoy of coalition soldiers traveling in a mine resistant vehicle triggered an improvised explosive device (IED). The vehicle rolled over in the blast, injuring the passengers.

Spc Walsh, a 32-year-old soldier, was treated by a field medic who reported, “The patient was in extreme pain but remained hemodynamically stable.” The medic immobilized Spc Walsh, including his leg, which was in a flexed position, locked in internal rotation. Walsh was then transported, within an hour including flight time, by a medevac helicopter to the nearest level 2 combat hospital. 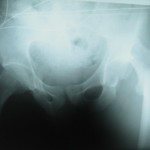 What would be your initial diagnosis and treatment?